Molecular sieves are composed of silicon, aluminum and oxygen atoms. The ionic charges of these molecules should add up to zero in a stable crystal. To balance the positive and negative loads, positively charged ions such as potassium, sodium, and calcium are added. The huge surface with positive and negative ions is called the adsorption field. There is a strong attraction between the adsorbate and the adsorbate, and it takes a lot of energy (usually thermal energy) to eliminate the attraction and reduce it to a sieve. As the concentration of the adsorbate increases, the density charge field increases so that few layers of adsorbed molecules exist.

Eventually, the adsorbate is near full load and the pores are filled, similar to capillary condensation. If both water and benzene molecules enter the 13X crystal, both have the same chance of finding the charge field and adsorbing into the crystal, since both molecules are polar. However, some molecules like nitrogen and argon have no apparent polarity, so they may be weakly adsorbed to the crystal and easily replaced when a large influx of polar molecules occurs. During the adsorption process of molecular sieves, thermal energy is released to the surroundings. All of the molecular sieves we have now mentioned are capable of absorbing 20% of their weight in water at room temperature. Molecular sieve-filled insulating glass units can reach a low temperature dew point of -70°C with a few grams of desiccant. 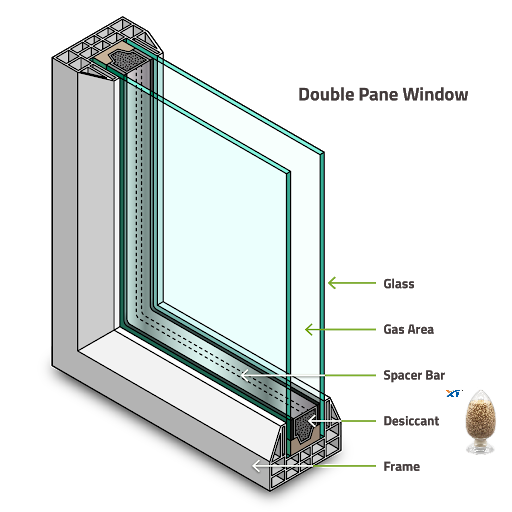